A few years ago, while I was rummaging around the National Archives in London (UK), doing research for a book I was writing on tontine schemes, I came across a rather remarkable (although unrelated) document written over two centuries ago. It was a pamphlet consisting of approximately 25 pages, the first of which is shown and reproduced down here on the left. The author of this pamphlet was anonymous and simply signed his name on the publication date of June 3rd, 1808, as A. Briton, which is clearly a pseudonym. Note that the archives are replete with such brochures, as there was a vibrant culture of pamphleteering in London in the 17th, 18th and early 19th century. But, this particular document caught my eye because of the odd title. It’s rather long, but here it goes: “Annuities to Fools or Madmen: Plain Statements to Convince Those Persons of Credulity, Who Are Willing to Surrender Hundreds and Purchase Tens, by Way of Annuities.” Basically, the entire document consists of one very long tirade against the purchase of — yes, you guessed it — annuities. 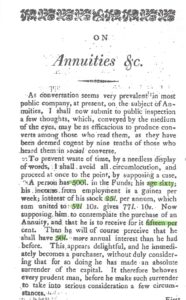 Now, annuities have been used for millennia and this isn’t the place to discuss a history that goes back to Roman and even biblical times, but they were quite popular as retirement investments during the 18th and 19th century. At the time the above brochure was written, the British government was the main vendor of annuities — not insurance companies, who would take over later on. But, no different from annuities in the 21st century, the annuitant would hand-over a sum of money to the vendor in exchange for a promise or guarantee of a lifetime of income that might begin immediately (#SPIA) or at some later date (#ALDA). Investors would purchase annuities to provision for themselves in their old age, usually supplementing income they had from real estate, as well as dividends from stocks and other commercial investments. Actuarial science was still in its infancy and these annuities were often mispriced to the benefit of the annuitant. But, anyone could buy an annuity which would entitle them to a lifetime of cash-flow somewhere in the range of 10% to 15% of the premium. Thus, 100 pounds investment would generate as much as 15 pounds a year, for life. Yes, I wish retirees could get those rates in the 21st century, but these days I am nostalgic for many things in the past.

As you might suspect the author of the brochure was definitely not a fan of annuities, to say the least. He (and I’m tempted to call him Ken) believed that anyone who dared to buy an annuity was a fool and a madman. The entire 25 pages of the brochure consists of a litany of abuses levelled towards anyone foolish enough to “surrender hundreds and purchase tens.” Here is but a small sample of his tirade. In the first few pages he explains how an annuity actually works, and emphasizes the illiquidity and irreversibility of the transaction. And, although he doesn’t use the (modern) word surrender charges, he does discuss the difficulty in changing your mind after you buy the annuity, and the fact that payments completely cease upon the death of the annuitant. The anonymous author then goes on to state, and I quote, that “Therefore, to purchase an annuity would be both unjust and impolitic. It would be unjust towards surviving relatives and impolitic towards the annuitant himself, since he would be limited to a sum for subsistence in the last periods of life.” In other words, in the event of a medical emergency, it would be impossible to extract from the annuity contract anything more than the periodic income, which is true and quite reasonable. All good so far, and perhaps the author was concerned with people who allocate all of their wealth to annuities. Foolish indeed. 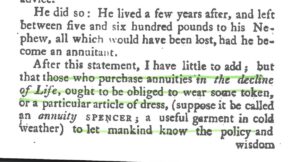 But as you read on the argument becomes more outrageous. “The annuitant would not find the same degree of attention and civilities shewn (sic) towards him, neither by his relatives nor strangers, as if he had kept some stock in hand to leave to survivors.” In other words, to put it crudely, your friends and loved ones would abandon you if they knew you don’t plan to leave them any bequest. Here is another gem of a sentence: “Surely one of the most ridiculous notions that ever entered the head of many is that of becoming an annuitant, by sinking a capital with a view to save money.” And the punchline: “There are fools who will be talking without thinking.” After a few more pages of vitriol, including reference to some actual people the author managed to convince, not to buy annuities, the author concludes his initial arguments with: “Those who purchase annuities in the decline of life, ought to be obliged to wear some token or a particular article of dress to let mankind know the wisdom of their conduct, in sinking hundreds for ever, to receive tens on the mere contingency of an uncertain existence.” (Did he have in mind a yellow star?)

But this pamphlet isn’t a dispassionate and wacky treatise against annuities. The objective, which becomes clear after a few pages, is the author’s alternative to an annuity. Yes, Mr. Briton wasn’t just writing this to save people from annuities. He was advocating that instead of buying the annuity, they use the money to purchase some good stocks that are traded on the stock exchange. And, our Mr. Briton would be delighted to help you acquire such a portfolio for a small fee. Remember, this was the late 18th and early 19th century, and many such schemes were being promoted to the public. So, this brochure was not a public service announcement, or a good Samaritan’s attempt to rescue the lost capital of the elderly. No, this brochure was a marketing and sales piece. The author would print a bunch of these brochures — go to where annuity buyers hang out (golf courses?) and hand this out to prospects who were considering buying an annuity – hoping to convince them to acquire stocks instead. 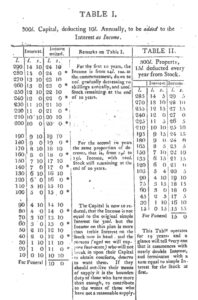 Now, the author himself was well aware that no corporate dividend would ever exceed the payout from the annuity — or what we in the 21st century would call mortality credits. To compensate or solve for that problem he suggested that to replicate the identical income stream as the annuity provides, the owner should periodically sell some of the stock capital in addition to living off the dividends. In other words, he suggested that his client create — what we might label — a systematic withdrawal plan (SWIP) instead of buying the annuity. Remember, this was the year 1808. Famous George III was still king. The defeat of Napoleon at Waterloo was still a few years away, but conflicted advisors were bashing annuities. Our anonymous Briton did more than write. He was a bit of a quant as well. The brochure contains three entire pages of tables – two centuries before Excel spreadsheets — where he lists in one column the blended capital and dividend payment and in the other column he lists the annuity cash-flow. He then claims that “arithmetically” the former (a.k.a. swip) beats the latter, which even I have to agree with, but only if the annuitant died before his tenth year of ownership.

Ah, you say. What if the annuitant lived longer? Did the author appreciate the annuity as hedge against longevity risk? Did he grasp the insurance component? The utility value of protection? Not really. This is what Mr. Briton had to say about human longevity. “No man at sixty years old has a right to estimate his existence at more than seven years, even supposing his health is good, because the average of persons at sixty is against their reaching to sixty seven.” Well, that wasn’t true 200 years ago – conditional on reaching age sixty — and that certainly isn’t true today. But, if you completely ignore the possibility of living much longer than average, then I too concede that annuities are for fools and madmen.

In sum, besides the amusing anecdotes and the vivid Dickensian image of London investment promotors in the early 19th century, there is an important take-away from this historical document. Namely, when someone is criticizing annuities, or labeling buyers as “fools and madmen”, you really have to stop and wonder what alternative they are promoting – and how they are getting compensated. Conflict of interest is timeless.

Back To Blog Page